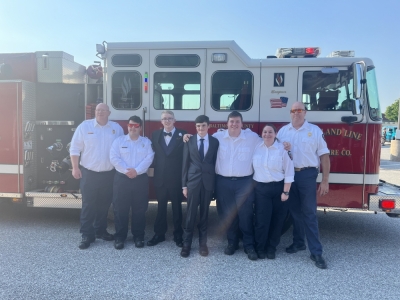 MLVFC had the pleasure of taking one of our members to his senior prom this weekend. It was with great pleasure that we could provide this opportunity. Congratulations Gunnar, you will wanna go back t...
➠
MLVFC Takes 7th District Student to School
MLVFC had the oppurtunity in conjunction with the 7th District PTA to offer a ride to school on a fire engine for 1 of their students. It served as a great fundraiser for the school as well as a great...
➠
Members Wanted
Have you ever wanted to help the community.Well joining Maryland Line Volunteer Fire Company, we offer a wide variety of classes all completely free of charge to members.Stop by the station at 21631 Y...
➠
About us

The Maryland Line Volunteer Fire Company has served the residents of Northern Baltimore County, Maryland since 1940. In the early years of the twentieth century there were many discussions concerning the need for fire protection in the rural regions at the northern end of the county. These discussions invariably reoccurred each time there was a major fire in the area. However, the rural nature of the area and the lack of rapid transportation prevented the development of an effective fire service. Several localized attempts to establish a fire service were not very successful. One example was a large chemical extinguisher, that had to be pulled to a fire by any available men.

Finally, in 1943 enough interest and community support existed to allow the first step in fire protection to occur. A cistern measuring approximately 12 feet by 15 feet by 60 feet was constructed and filled with 57,000 gallons of water. That original cistern is still in use and is an integral part of our fire station today; providing a source of water for fire-fighting and refilling engines.

At that point we had a water supply, but no engine to fight fires with. In 1944, with the help of Civil Defense, and the loan of a truck chassis, our first engine was placed in service. It was a beginning, even though it was a makeshift vehicle. By December of 1944, a war surplus fire engine was purchased, renovated, and placed in service. Finally we had the capability to fight fires in a professional manner.

The next major hurdle was to find a warm, dry location where we could house the engine. During 1945 a building was designed and financing was arranged by borrowing money from people in the community. As with all other indebtedness of the Company over the years, this money (along with interest) was eventually repaid. During May of 1946 the building was completed and the engine was moved into the equipment bay. Later that year our first Supper was held in the building as a fund raising activity.

Over the next few years, numerous improvements to the equipment occurred. The quality and the capabilities of the engines were greatly expanded. Additional units were added such as a second engine, a 2,000 gallon tank truck (needed due to the lack of available water in many areas), and a brush unit to assist in controlling field and woods fires. Each improvement was part of a consistent attempt to provide the citizens of Northern Baltimore County with the best possible Emergency Fire and Rescue Service.

Personal protection for fire fighters as they perform an extremely hazardous job has also improved dramatically over the years. Today as a fire fighter responds to your call for help, the fireproof Nomex suit and the Self Contained Breathing Apparatus that each volunteer wears costs over $2,500.00 per person. In every case, the members of the Company had to raise the money to pay for these improvements. Only a very small percentage of the cost is paid through County tax funds.

The past and present members and officers of this company have expended their best efforts in the process of fighting fires, reponding to emergency and rescue calls, becoming properly trained, managing the business of the company, raising funds, and other headaches and heartaches associated with providing volunteer fire emergency services. We could not have done this without the support of the people in our community.

The mission of the Maryland Line Volunteer Fire Company is to dedicate our efforts and to devote our energies to the SAVING OF LIVES and PROTECTING OF PROPERTY of the people who live in, visit, or travel throughout our community.

This site has been viewed 389,125 times.
News
Pictures
Apparatus
Maintained by the members and staff of Maryland Line Volunteer Fire Company. Designated trademarks and brands are the property of their respective owners. Copyright © 2006-2022. YourFirstDue Inc. All Rights Reserved. Content on this web site is supplied by Maryland Line Volunteer Fire Company. YourFirstDue Inc. cannot be held responsible or liable for any content, text, pictures, or any other media found on this web site.
Management login
Powered by